The Dynamic Filtration Efficiency (DFE) Test is Hy-Pro's standard for testing filter elements. Throughout this four-part  (find parts two, three and four) we'll discuss what it is, why it matters and why elements engineered with this test in mind outperform others in real-life applications.

First, let's start with the basics.

Why are filters used? How are they rated? 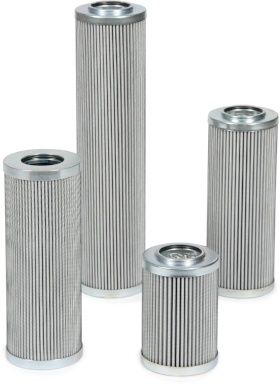 All hydraulic and lube systems have a critical contamination tolerance level that is often defined by -- but not limited to -- the most sensitive system component such as servo valves or high-speed journal bearings. Defining the ISO fluid cleanliness code upper limit is a function of component sensitivity, safety, system criticality and ultimately getting the most out of hydraulic and lube assets.

Filters remove the particulate contamination that enters a system or is generated by the system as it operates. All filters are subjected to some form of system dynamics: hydraulic filters encounter frequent and rapid changes in flow rate when valves shift, cylinders unload and pump output changes; lube filters experience dynamic conditions during startup and shut down. Filters validated only to current ISO testing standards don’t perform as expected when subjected to the demands of real-world dynamic operating systems.

Capture efficiency is a measure of how effectively a filter captures particles. It is defined in terms of Filtration (Beta) Ratio per ISO16889 and is recorded during the ISO16889 multi-pass test used by most filter manufacturers.

our Beta Ratio found in the first example, we can calculate that the test filter is 99.33% efficient at capturing particles 7μ[c] and larger

Retention efficiency is a measure of how effectively a filter retains the particles it has captured. It can be determined by comparing a filter’s Filtration (Beta) Ratio during constant flow rate, increases in flow rate and decreases in flow rate. It is not recorded during the ISO16889 multi-pass test used by most filter manufacturers.

A filter is not a black hole, and its performance must not be based solely on how efficiently it captures particles. If not properly designed and applied, a filter can become one of the most damaging sources of contamination as it will release previously captured particles when challenged with dynamic conditions.

The lack of a method to test filters under varied flow rates led to the development of The Dynamic Filter Efficiency Test (DFE) in 1998 as a joint effort between Scientific Services Inc. (SSI) and Hy-Pro Filtration. DFE is the evolution of standard hydraulic and lube filter performance testing. DFE goes further than current industry standards to quantify capture and retention efficiency in real time by inducing dynamic duty cycles, measuring real-time performance during dynamic changes and the filters ability to retain particles. DFE testing is the method for predicting worst case fluid cleanliness along with average fluid cleanliness.